A good meal at a 5-star hotel is even better with a nice view. The parking lot of the hotel where my lab was staying in the trunk of our rented car had an amazing view of the city. He just finished his lunch and was going to take me for a walk around the parking lot.

My lab put his leash on and was ready to depart but man proposes, god disposes. A black golf blocked a red Nissan truck parked next to our car. The red truck already caught my attention earlier in the morning, when we arrived, because its trunk was full of garbage with new shiny black shoes on top of it. I was never able to figure out why some girls put this super red lipstick just to get a cup of coffee at Starbucks. I guess there is a reason why its commercial name, lustrous, has lust in it. I have no idea how the girl, who just stepped out of the car, looked like without the lipstick but she was stunningly beautiful with it.

She was talking (mostly cursing) on the phone. Even though I normally understand US English fairly well, I could barely understand what was she saying on the phone. The only explanation I had to the sudden onset of aphasia was that her car's license plates were from Texas.

"If you are not here in 5 minutes we are over," the girl proclaimed and hung up. Nothing happened in the next five or ten minutes so she gave him another call that contained mostly the f-bombs.

"Cute," she said talking to me but looking at my lab. "But stupid as it frequently happens" I replied. Unfortunately, she paid no attention to my remark and continued, now talking to my dog. "You see my 2-year old doggie is in trouble and I need my asshole boyfriend to help me!"

Fifteen minutes later the asshole boyfriend was not still there but a parking spot opposite to my car has just opened. I have never been to Texas but if everybody there drives like her then I know why Texas is a lone a star state. The black Golf first accelerated like it was planning to fly through the wall and then suddenly came to a halt. Nevertheless, she parked just perfectly.

"You f-ing asshole if you are not here in 2 minutes say goodbye to your f-ing tires because I am f-ing gonna puncture them all. I swear."

A minute later a parking security car blocked her car and 5 guys in black that looked more like cops from a SWAT unit surrounded the woman. "Can I see your ID please," one of the "SWAT" guys politely asked. "I don't have a f-ing ID," she promptly replied. "Then we will have to call police," the guy replied. Not sure how she did it but two seconds later and despite being surrounded by five heavy guys she was sitting in her golf trying to force her car through a small gap between the security car and a car parked next to her golf, alas, without any luck.

At this point I really wanted to finally go for a walk with my dog but he got scared from all the the loud voices and all the tense faces so he was cowardly sitting on my sneaker. I was not sure if he was going to bite someone or just pee on me, if I were to move my foot.

It took me some time to understand why the security suddenly arrived. An old and very upset couple was showing a badly scratched door of their car and pointing at the woman. "Wait," I said "She could not possibly have done that. I know because I was here all the time."
"Do you know her" a security guy asked me.
"I don't."
"Can you then testify that she did not do it."
"I can."

The guy started his car and unblocked the golf. Two seconds later the golf was racing towards the exit. Then it suddenly halted again and backed up. "Thanks dude, and looking good too."

Get the latest posts delivered right to your inbox 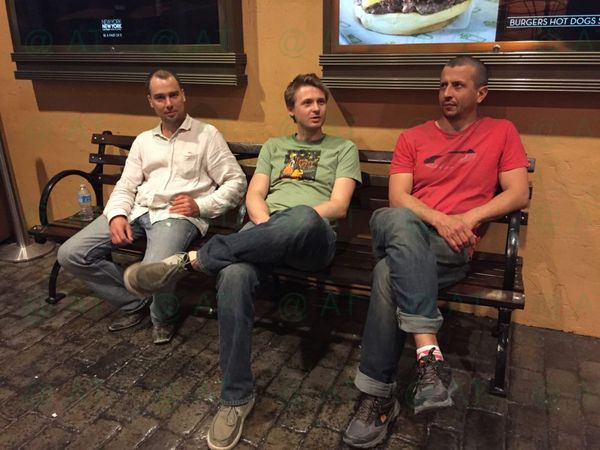 5:36pm Getting some rest while they pack and rent a car. There will be no time for sleeping later because we plan to be in Las Vegas by sunrise.

Stay up to date! Get all the latest & greatest posts delivered straight to your inbox